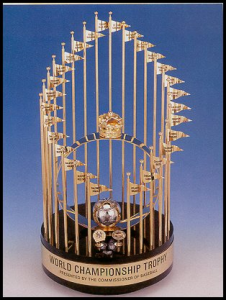 The World Series is played between the champion clubs of the American and the National Leagues, which collectively includes 29 clubs based in the United States and one club from Canada. The "modern" World Series has been and annual event since 1903. Baseball has employed various championship formulas since the 1860's. When the term "World Series" is used by itself, it is usually understood to refer to the "modern" World Series exclusively.

^ The Boston Red Sox were called the Boston Pilgrims in 1903