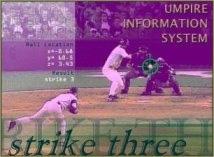 QuesTec is a digital media company known mostly for its Umpire Information System (UIS) which is used by Major League Baseball for the purpose of providing feedback and evaluation of Major League umpires. The QuesTec company, based out of Deer Park, New York, has been mostly involved in television replay and graphics throughout its history. In 2001, however, the company signed a 5-year contract with Major League Baseball to use its pitch tracking technology as a means to review the performance of home plate umpires during baseball games. The contract has continued through the 2008 season by annual extension and topped out at 11 ballparks. In 2009 it was replaced by MLB's Zone Evaluation.

Major League Baseball has contracted QuesTec to install, operate, and maintain the UIS in support of MLB's previously announced strike zone initiatives. The UIS uses QuesTec's proprietary measurement technology that analyzes video from cameras mounted in the rafters of each ballpark to precisely locate the ball throughout the pitch corridor. This information is then used to measure the speed, placement, and curvature of the pitch along its entire path. The UIS tracking system is a fully automated process that does not require changes to the ball, the field of play, or any other aspect of the game. Additional cameras are mounted at the field level to measure the strike zone for each individual batter, for each individual pitch, for each at bat. This information is compiled on a CD ROM disk and given to the home plate umpire immediately following each game.

The UIS uses QuesTec's proprietary measurement technology. Quite different than "video insertion" technology that simply adds graphics to the broadcast video, QuesTec technology actually measures information about interesting events during the game that would not be available any other way. This technology is so innovative it appeared in a Scientific American article in September of 2000. The ball tracking component uses cameras mounted in the stands off the first and third base lines to follow the ball as it leaves the pitcher's hand until it crosses the plate. Along the way, multiple track points are measured to precisely locate the ball in space and time. This information is then used to measure the speed, placement, and curvature of the pitch along its entire path. The entire process is fully automatic including detection of the start of the pitch, tracking of the ball, location computations, and identification of non-baseball objects such as birds or wind swept debris moving through the field of view. No changes are made to the ball, the field of play, or any other aspect of the game, to work with QuesTec technology. The tracking technology was originally developed for the US military and the company has adapted it to sports applications.