The Past and Future of the Baseball Bat 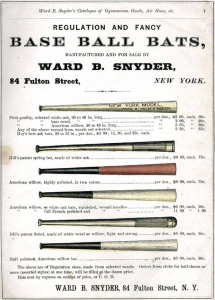 By the 1860s, there were almost as many types of baseball bats as there were baseballs. And like early pitchers, who made their own balls, early batters were known to sometimes whittle bats to suit their own hitting style.

As you might imagine, the results were quite diverse - there were flat bats, round bats, short bats and fat bats. Generally, early bats tended to be much larger and much heavier than today's.