THE GLOVE AND THE MASK 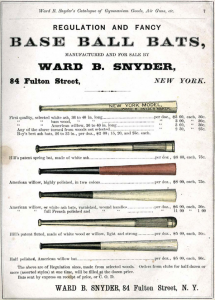 When a glove is mentioned in conjunction with 19th century base ball the listener or reader must not think of the glove as it exists today. The glove started out as merely a leather work glove, with or without full fingers, and progressed to a more padded piece of equipment. It is impossible to pinpoint the first player to wear a "glove" but there have been reports as early as 1860 that catchers were wearing them. It is logical that the catcher would be the first position player to wear them as they handled hundreds of pitches per game as well as foul tips. It would seem that the first baseman would be the next position player to don a "glove."

In 1885, Providence Grays shortstop Arthur Irwin, while attempting to protect two broken fingers, added "padding" to a buckskin glove. This may be the first instance of a player introducing noticeable padding to a glove.

As the evolution of the glove progressed, the National League and American Association of Base Ball Clubs instituted a rule in 1895 which stated, "The catcher and the first baseman are permitted to wear a glove or mitt of any size, shape or weight. All other players are restricted to the use of a glove or mitt weighing not over ten ounces, and measuring in circumference around the palm of the hand not over fourteen inches." This would be the rule for the rest of the 19th century. Also in 1895, Cincinnati Reds second baseman Bid McPhee, the last of the bare-handed players, opened the season on April 16, wearing a glove.

The catcher's mask may have been first worn by Jim Tyng of the Harvard University Base Ball Club in an exhibition game loss against the Boston Red Stockings in May of 1876, 7-6. Tyng's roommate and team Captain, Fred Thayer, is said to have "invented" the mask in 1875. Thayer modified a fencing mask which enabled Tyng to move closer to home base and receive the ball without fear of being struck in the face. Tyng also wore a small padded glove in the game.