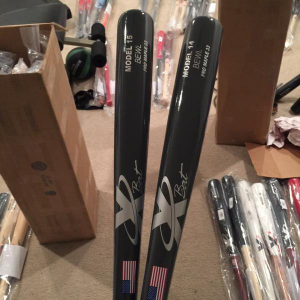 Back in the 1840s, long before companies began to mass-manufacture Wood bats, players actually had to make their own bats. Working with whatever wood was laying around, whether it was an ax handle or a wagon wheel spoke, these makeshift bats were known as “striker’s sticks.” Over time, the wagon tongue wood became the material of choice for these bats. Using the spokes of freight wagon wheels that were used during the 1800s, the spoke would be shaped into a flat, hitting stick that was tapered at one end to create a grip. Because wagon wheels were mostly made from hickory wood, which is very hard, the bats were long-lasting and didn’t often need to be replaced in the underhanded pitching games that were popular at that time.

Eventually, round bats came into vogue as players realized that they were better for hitting than flat bats. Throughout the 19th century, as the popularity of baseball grew, various shapes and sizes of round bats were developed. Because there were no regulations in place to dictate the size, length, and width of the bats, players were free to develop all manner of bats. Some liked them short and heavy, while others preferred them long, slender, and light. There was even a bottle bat, so named because of its large and round hitting surface.

As the game of baseball evolved, it transitioned to a faster, overhand pitch, which resulted in many splintered bats. Rather than replace the bat, which would cost money they didn’t have, players would wrap the bat with string to pull the splintered bat back together. This wrapping technique developed over time into the concept of a grip, causing players to wrap handles with tape, cord, and string--anything to make the bat work better.

By the late 1850s people started making game rules, and in 1859 the Professional National Association of Baseball Players Governing Committee created a rule that limited the size of bats. Bats could not be more than 2-½ inch in circumference at the thickest part, although they still could be any length desired. Within a decade that too was changed, and the length was limited to 42 inches, a rule still in effect today.

These rules naturally led to the manufacturing of bats in order to comply with standards. Professional woodworkers were enlisted, and they used lathes to shape the bat. Here is where the hunt for the perfect baseball bat wood began. As the business of making baseball bats grew, the race for making the best bat was on. Long and slender bats were common, the carved knob handle was added for control, and wood grains were explored in an effort to create the best quality bat. Woodworkers experiment with ash, hickory, bamboo, birch, and maple. Eventually, by the 21st century, maple and birch emerged as the leading contenders for creating strong bats among professional players.

By the late 1800s, several more rules came into effect: Bats could not be sawed off or flattened for bunting, and the pitching was relocated to 60 feet and 6 inches from home plate. The bat’s diameter was permitted a ¼-inch increase to 2-¾ inches.

While Wood baseball bats have continued to be refined throughout the 20th century and into the 21st, their style has not changed significantly since the frenzied developments and experimentation of the mid- to late-19th century.

Here are some of our favorite Wood bats from X Bats:

While maple is currently a baseball pro favorite, followed by ash, birch is also a rising star, as it offers the hardness of maple and the flexibility of ash. With 30 adult baseball bat models, players can choose between maple, ash, and birch to find the perfect bat. X Bats uses the same quality of wood for both amateur and professional adult players.

The fast pitch softball training bat has a short barrel with a small sweet spot. This helps the player develop a short, direct swing, allowing him or her to build more power. The long, loopy swing that many softball players have is not conducive to keeping the hitter’s hands inside the ball. The training bat also helps train the player to wait longer on the pitch and hit outside pitches to the opposite field.

This short barrel bat harkens back to some of the earliest bats developed. A short barrel helps develop bat speed, the key to being an accomplished hitter. This is done by getting the body used to swinging faster with an underload bat. The short length also helps in hitting the sweet spot. Both the faster swing and hitting the sweet spot consistently are the crux of becoming a solid-spot power hitter.

To order the perfect Wood bat for your best hitting and swinging, visit the X Bats web site.