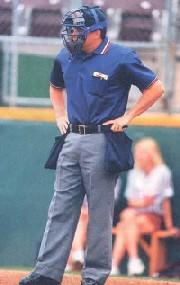 Although major league umpires, save for a few short-lived experiments, wore blue serge suits and officiated according to the same rule book, subtle and not-so-subtle differences in the style and technique of umpiring developed between the two leagues. Inasmuch as league presidents from the beginning hired, assigned, and instructed their umpires, personal preferences were reflected in the umpiring staffs early in the century. Then inter-league chauvinism sustained and accentuated the distinctiveness. Under Ban Johnson's leadership, the American League soon boasted an overall staff that was superior to the National League, just as the Junior Circuit had more star players, stronger teams, and more successful managers during the same period. Because Johnson believed that all of his umpires were good enough to work the World Series, the prestigious (and lucrative) assignment was rotated among his staff, whereas postseason honors in the National League went selectively to the best (or most favored) umpires. In return for backing his umpires to the hilt, Johnson demanded reserve and restraint on the field, whereas National League presidents adopted a more laissez-faire attitude toward their umpires.

As a result, arbiters in the Senior Circuit were far more colorful, pugnacious, and individualistic than their American League counterparts, just as National League players and managers were freer and higher spirited than those in the Junior Circuit. It was a volatile mix, and there were many more rhubarbs, fines, and suspensions in the National League, where arbiters had to be courageous in fending off mean-spirited players and managers. And because Johnson liked his umpires to display a strong physical presence, a preference shared by Tommy Connolly, American League umpires were generally "big" men, whereas most National League arbiters, because of the dominant role of the five-foot-seven-inch Bill Klem, were shorter and slight of build.

More important than general differences in style and appearance were the specific differences in technique between the two leagues. At first umpires in both leagues held large inflated chest protectors in front of their bodies when behind the plate. Consequently, they called balls and strikes by crouching directly behind the catcher and looking over his head. The American League continued to use the "balloon" or "mattress" as favored by Tommy Connolly, but it became de rigueur in the National League to follow Bill Klem's preference for wearing a more compact chest protector under his coat and calling balls and strikes by viewing the plate from just over the catcher's shoulder nearest the batter. Here, form had great effect: the American League umpires became known for calling more "high" strikes and the National League for calling more "low" strikes.

Not as well known as the flamboyant umpires of the formative years, the men who worked between the World Wars were collectively better umpires and included some of the game's greatest arbiters. Along with Emslie, Klem, O'Day, and Rigler, the National League staff boasted George Barr, Lee Ballanfant, Larry Goetz, George Magerkurth, "Uncle Charley" Moran, Ralph "Babe" Pinelli, Ernie Quigley, and John "Beans" Reardon. Joining Connolly and Bill Dinneen in the American League were such luminaries as Harry Geisel, Cal Hubbard, George Moriarty, Bill McGowan, Emmett "Red" Ormsby, and Clarence "Brick" Owens. Perhaps the best was McGowan, who for thirty years received universal praise from his peers and ranks as one of the premier umpires in history.

Sociologically, the umpires of the Golden Age represented both change and continuity. Like their predecessors, the majority hailed from the Northeast, the Midwest, and the South; and many were former athletes for whom umpiring was a way of staying in baseball. Some were ex-major leaguers--Charlie Berry, Bill Dinneen, George Hildebrand, Charlie Moran, George Moriarty, Hank O'Day, Al Orth, Babe Pinelli, George Pipgras, and Eddie Rommel. There were, however, important changes. Ethnically, the umpires reflected a pattern of cultural assimilation similar to that evident in the rosters of players. Initially umpires were overwhelmingly English in origin, but then the Irish by the 1890s and Germans by World War One became conspicuous and were followed by Jews in the 1920s and Italians and Slavs in the 1930s. And where collegian Billy Evans was unique among the mostly unlettered arbiters early in the century, college-educated (or graduated) umpires were increasingly common. Essentially, umpires between the wars had become a reasonable cross section of the white working-class American population.