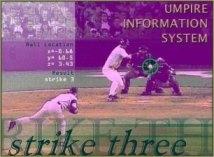 That same year a new professional circuit, the American Association, pioneered in the creation of an umpiring staff that was hired, paid, and assigned to games by the league itself. Paid $140 a month and $3 per diem for expenses while on the road, American Association umpires were required to wear blue flannel coats and caps while working games. The next year the National League adopted its own permanent paid and uniformed staff, thus completing the professionalization of major league "men in blue."

Despite increased status, umpiring in the major leagues was an uncertain, stressful, and even dangerous occupation through the end of the century. Frequent revisions in the rules and innovations in playing techniques made the umpire's job exceedingly difficult, while the physical and verbal abuse from fans and players alike often made an umpire's life intolerable. Umpires were routinely spiked, kicked, cursed, and spat upon by players, while fans hurled vile epithets and all manner of debris at the arbiters. Mobbing and physical assaults were frequent, so much so that police escorts were familiar and welcome sights to the men in blue. The transformation of the umpire from esteemed arbitrator to despised villain was largely deliberate. As club owners and league officials recognized that umpire baiting boosted gate receipts, they refused to support the umpires' field decisions, dismissed or paid player's fines, did little to curb rowdiness, and even joined sportswriters in depicting umpires as scoundrels and scapegoats. Occasionally umpires retaliated by hurling objects back into the stands or by punching players and reporters--and were summarily punished for so doing. But most found other jobs. In an era when "Kill the umpire!" was not mere rhetoric, there was a high turnover rate in umpires as few men were willing to endure such trials and tribulations for paltry pay and poor working conditions.

Nonetheless, baseball's tumultuous era produced several umpires of historical importance. William B. "Billy" McLean, part-time pugilist from Philadelphia, was the first professional umpire. So great was his ability and reputation for fairness that National League officials in 1876 not only agreed to his demands for the unheard of $5 per game but also sent him on a expense-paid tour of every city in the league. The most famous early exponents of the two basic styles of umpiring were Robert V. Ferguson and John H. Gaffney. Ferguson, known during his playing days as "Robert the Great" and "Death to Flying Things," ruled as an iron-fisted autocrat, while Gaffney, dubbed "The King of the Umpires," controlled the game through tact and diplomacy. Gaffney also popularized the technique of working behind home plate until a player reached base and then moving behind the pitcher. (Before this the umpire worked either behind the batter or behind the pitcher and did not shift.) In 1888 Gaffney was the highest-paid umpire in baseball, earning $2,500 a year, plus expenses on the road.

On July 14, 1890 Ferguson participated in major league baseball’s first four-man crew in an American Association game. The A.A. was the first league to use two man umpiring crews. Due to a scheduling mix up, two two-man crews showed up in Brooklyn that day. Ferguson took home plate in the first inning. From then on, the umpires rotated around the bases each inning. The next four-man crew would not occur until the 1909 World Series.

Other umpires of note include John O. "Honest John" Kelly, who appeared in more World Series (five) than any other umpire of the day; feisty Timothy Hurst, quick and handy with curses, quips, and fists; Benjamin F. Young, killed in a railroad accident en route to a game, who in 1887 drew up a professional code of ethics for umpires as well as a ten-point proposal to improve their status; John F. Sheridan, the prototype of the modern umpire; and John A. Heydler and Thomas J. Lynch, each of whom later became president of the National League.